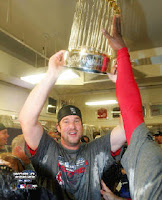 Then he threw the remarkable 1 hit performance at Yankee Stadium to clinch the pennant and finish the greatest comeback in baseball history (or the biggest collapse depending on who you talk to.)

His last game in a Red Sox uniform? He pitched 7 shutout innings and the Red Sox clinched the World Series.

Not a bad last game.

Now as I wrote in my reunions post, Lowe gave us agita as well... but he had the good sense to leave on top.

He deserves a very very long ovation... and then hopefully he loses to Beckett.

Actually I hope the bullpen blows a lead for him. I can't root for a 2004 Red Sox to lose.