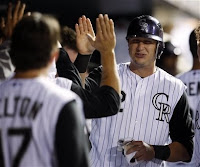 Well, it looks like getting rid of Clint Hurdle was the right move for the Rockies.

Jim Tracy has been the manager for 15 games and they've won 11 of them, including the last 9.

But Ubaldo Jimenez threw a complete game in Coors (humidor or not, that is quite an accomplishment) and the Rockies are playing like it is late September/early October 2007.