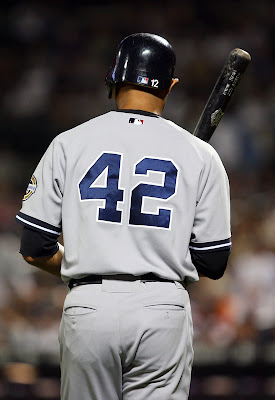 Hey, I don't usually write glowing praising e mails to Yankees... especially those who won the MVP of the 2003 ALCS against my Red Sox.
But last night he got his 500th save. Now the save can be overrated. I have trashed All Time Saves leader Trevor Hoffman a few times because I think that despite his 571 saves, he's not someone I'd want on the mound in a big game.
Don't believe me? Read it and weep.
But Rivera? He's been the best or one of the best for 14 straight seasons... and let's look at that post season.
Imagine if a closer had a 0.77 ERA over 117 1/3 innings. Posting an 8-1 record with 34 saves, striking out 93 while walking only 16.
That would be a hell of a season.
That's his post season totals.
His only loss was Game 7 of the 2001 World Series. And his failure there and in the 2004 ALCS were so unlikely that they were considered to be two of the most miraculous comebacks ever.
If a team has a comeback in the playoffs against Trevor Hoffman, it is called "par for the course."
And let's see Rivera in one day vanquish another overrated rival, Francisco Rodriguez. Now I have already written about why I think Rodriguez is overrated... but last night gave us all a unique head to head match up... closer versus closer... that put Rivera on top without debate.
Frankie Rodriguez, K-Rod, walked Rivera with the bases loaded.
In a head to head match up, K-Rod couldn't throw one down the heart of the plate.
Was he expecting that Rivera would take him deep? He had 5 career plate appearances before last night. There were two outs. Lob it!
Nope. He couldn't do it. He was head to head with his superior and lost.
We Sox fans can shake our heads at Rivera and grind our teeth... but we can't deny he belongs with Gossage, Fingers, Eckersley and Wilhelm as the best reliever of all time.
And part of me would like to see him pass Hoffman as the saves leader so we won't have any silly arguments about Hoffman being a Hall of Famer.
But I hope Rivera does it in another uniform.
Posted by Sully at 2:09 PM