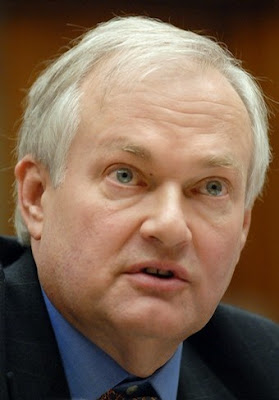 Donald Fehr is stepping down as head of the baseball union, and I think "Good!"

But I think that not for the reasons that you probably think.

I know a lot of people dislike him because he helped baseball players salaries skyrocket. But I don't begrudge players from making money. Who out there would turn down their money?

I don't blame him for the World Series cancellation. I remember getting into arguments with people during 1994 when I insisted the players were right and the owners were a bunch of liars who wouldn't open their books.

And keep in mind that was tempered by the fact that Fehr helped expose the owners illegal collusion. That collusion led directly to outsing Fay Vincent, Bud Selig being put into office, over expansion, the 1994 strike, steroids and the insane handling of the Expos/Nationals franchise.
In other words, I don't think he's a bad guy.
I think he seems a little creepy and cold. It would be nice to see him smile. It would be nice to see him at a baseball game cheering.
It would have been nice if his name wasn't the same as the word FEAR.
It also would have been nice if his default position on the whole steroid issue wasn't "You have no proof and this is a privacy issue."
But here's something to chew on... the owners seemed to hate him because he was so tough and yet Marvin Miller, his mentor, didn't think he was tough enough.
When the extremes on BOTH sides don't like you, that means you are probably doing a good job.
But it's time to move on.
The collective bargaining agreement is going to expire in a few years, and I think it is time to have fresh blood and new voices at the bargaining table. Almost all of the owners who have colluded have sold the team. And it would be nice if the main characters talking about avoiding a strike are not the same people who fiddled while the 1994 World Series was cancelled. 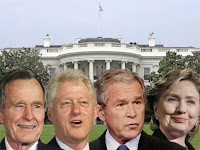 I was reminded of the California Democratic primary last year.
My wife and I disagreed on who to vote for. She voted for Hillary Clinton and I voted for Obama.
And as shallow as this might sound, it was the freshness of a new voice at the helm that made me decide. It was nothing against Hillary... but something bothered me.
If you were 19 years old during last year's election cycle, there had been a Bush or a Clinton in the White House your whole life.
And seeing that you don't really pay attention to trivial things like "who is President" until you are 8 or 9, then there were 28 year olds voting with no memory of someone NOT named Bush or Clinton as President. And when you take Poppy Bush's VP terms into account, there were 36 year olds with no concrete memories of a Bush or a Clinton not in the executive branch.
Mention the name Bush to a liberal and they wince.
The reaction is the same from a conservative when you mention the name Clinton.
And I thought "there is too much venom here... let's try a new flavor."
So in this very strange analogy, Fehr is Hillary Clinton.
It's time to try something new and something that doesn't have such built in acrimony.
And of course that also means one of those colluding owners needs to go too.
Hey Bud! Take Donald's lead. You've been Commissioner for 17 years. Time for someone new.
(Any chance I can get to ask Bud Selig to step down, I'll take!)
Posted by Sully at 2:10 PM