Wait, the Mariners are good again? When did THAT happen? 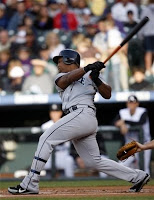 I was going to write a blog post about the Cardinals and Cubs need for a new third baseman during the stretch run. So I was poking around teams that were out of contention trying to find a good third baseman for these two teams to fight over.

I thought Adrian Beltre! He’s talented if inconsistent. Put him in a LaRussa team to hit behind Pujols and the Cardinals could go on a roll!

Put him in Wrigley and they might have another legit power threat.

And all of this is under the assumption that the Mariners would be sellers.

The Mariners are 2 ½ games out of first place.

Did you know that? I didn’t!

And the Rangers are wilting in the heat and the Angels are right on their heels but still not the same solid 100 win team they were last year.

When the hell did this happen? Was I so focused on the Red Sox and Yankees, and fascinated by the Phillies and Mets inability to win, and the Marlins ups and downs and the Pirates having ANOTHER losing season, and the A’s making my predictions look like mud and the Giants making my dad look happy and the Dodgers somehow getting better WITHOUT Manny and the Nats being historically terrible except during the Yankee series… that I missed the Mariners surge? 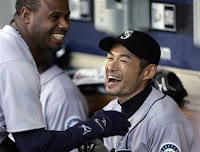 The Mariners can taste first place and they have Ken Griffey Jr AND Ichiro Suzuki on the same team!

I may have missed the evolution of this, but consider the staff at Sully Baseball gazing towards the Northwest. Something truly cool can be transpiring this year… and hopefully it ISN’T another Angels division title.