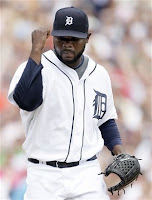 Last Wednesday I wrote about the Tigers and basically said they were a weak looking team that could turn into one of those teams that sneak up on people in October.

But I am starting to get very very impressed by them.

I thought the Twins would have passed them by now... but they keep winning... and winning.

Did you know they are currently tied with the Yankees for the second best record in the American League?

That's right... in the proverbial "If the playoffs Started today" game, the Tigers would not only be in the dance, but opening a home.

And they are having an MVP type season out of Miguel Cabrera.
And Justin Verlander is a legit ace.
And this kid Rick Porcello is the real deal.
And the rookie Alfredo Figaro should have the classiest intro music of any pitcher in the league.

Maybe this is an East Coast bias of someone living on the West Coast, but I guess I am a Tiger come lately.