I was stunned by the news about Sammy Sosa 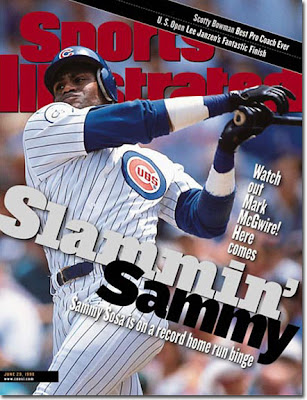 I was stunned that he wasn't ALREADY linked to a positive test. Seriously, is ANYONE stunned by this revelation?
A lean skinny kid bulks up between 1994 and 2003 and goes from being a decent 15-30 home run hitter to suddenly becoming the only person to hit 60 homers 3 straight years?
Nah... nothing suspicious about that!
The only question is what broke down faster:
His career when testing began or his knowledge of English when he was called in to Congress.
Seriously, he was the single most media saavy star in baseball for 5 years and suddenly he needs an interpreter?
Folks, if you want to shock me, tell me Julio Lugo is on 'roids.
Posted by Sully at 12:37 PM