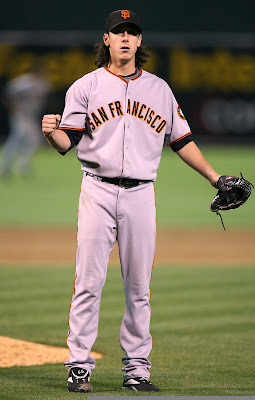 I may be jumping the gun a little bit here, but I think Tim Lincecum could reach heights of popularity that we haven't seen for any San Francisco star.
Let me explain myself.
As a pitcher, he is already showing he can walk the walk. He's only 25 and not only does he already have a Cy Young Award and with his complete game 12 K performance in Oakland last night, he seems well on his way to a second top 10 finish for the Cy.
So he is in an elite category as a player.
He's also helping turn the Giants around. This was supposed to be a painful rebuilding season... not one where they are contending for a playoff spot going into July.
But he also has a star quality.
He has a Jonas Brothers quality. He looks like a fun kid. He's got his dopey long hair and looks like he should be playing videogames.
He's not a macho athlete. He's kind of a laid back cool guy playing in a not exactly macho but laid back and cool city.
Picture him with long hair and the relaxed attitude in Philadelphia! Or Chicago!
He's tailor made for San Francisco.

Actually Barry Zito, with his yoga, his guitar playing and new age centeredness was tailor made for San Francisco. Unfortunately he left his Cy Young form in the East Bay. Yeah, he's pitching OK for a 3rd or 4th starter these days... but he's not making third or fourth starter money.
Plus he media savvy. His ads for MLB 2K9 are really funny and he comes across like a pro. He could be one of the new faces of the post 'roid era baseball. (Look at that frame... forget 'roids. I question if he is eating his Wheaties!)
And in San Francisco, he is the face of Post Bonds Giants. I am not one to dogpile on Bonds.
I've actually defended Bonds on this blog, even though I think he is less likely to pass a steroid test than Ivan Drago. And the more stars who turn up tainted, the better Barry looks in a twisted way.
But I think Giants fans wanted to turn the page. They want a new era to begin... and lo and behold it has!
Giant fans also want a title.
Their agony is underrated and the hunger for a World Championship is looking verrrrry familiar to this Red Sox fan.
The player who can deliver it will be beloved forever in San Francisco.
Lincecum could be that guy. If pitching wins championships, then who better than someone who looks like a perennial Cy Young contender?
Who could he unseat as the most popular sports figure in San Francisco history? 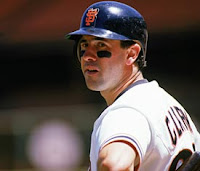 Will Clark?
Clark is the most popular Giant I have ever seen. Anyone my age who lived in the Bay Area speaks of him with intense reverence in a way that I can only compare to Yankee fans and Don Mattingly.
But as loved as Mattingly was, he will never surpass Jeter.
Jeter delivered the title. If Lincecum wins one in China Basin, Clark will take a backseat. 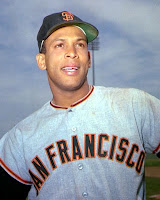 The Baby Bull was beloved... but let's face it. On his own teams he was the third most feared slugger.
Plus he won a ring... but he did so in St. Louis where he actually had some of his best seasons.
If Lincecum wins it all, being a member of the Hall of Fame and having a kick ass BBQ in left field will have to suffice. 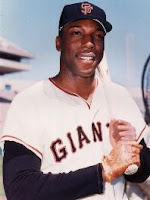 Willie McCovey?
How loved a Giant was Willie McCovey?
They named the cove behind right field after him and he never played an inning there.
But what's HIS World Series highlight?
You know... Bobby Richardson knows.
If Lincecum wins, he's above McCovey. 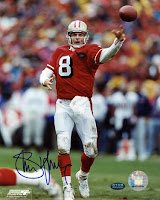 Steve Young?
Yup he won the Super Bowl.
Yup he kept the championship tradition going for the 49ers.
But he will always commit the sin of not being named Joe Montana.
Plus there is a little "been there done that" with 49er Superbowls.
There hasn't been a San Francisco Giants World Series title yet. 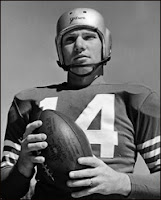 Y. A. Tittle?
Sure he was the first huge pro star in San Francisco...
But come on! He played in an era where they didn't have a facemask! Was that football?
He's on this e mail out of respect and to keep someone from writing an angry e mail to me!
Lincecum might be more loved than Tittle NOW! 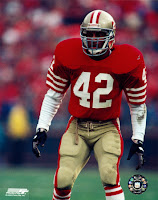 Ronnie Lott?
One of the great players who was part of the 1980 AND 1990s All Decade team and anchored the defense the way Montana anchored the offense.
But please... you can't have a defensive player be the most loved player of a big sports city!

Jerry Rice?
Hmm... would Lincecum be more popular than Rice?
Tough one. Rice is really loved and possibly the greatest receiver in football history.
Plus he pulled off the whole Dancing With The Stars thing off well.
But yes, I think a World Series title led by Lincecum would put him over Jerry Rice in the hearts of San Franciscans. 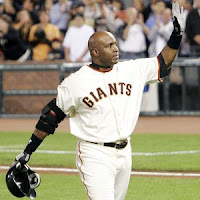 Barry Bonds?
Don't be confused... San Francisco fans on the most part loved Barry Bonds and cheered him on even when things got... um... controversial.
And Barry showed as much love as he could... but in the end it was more like Toshiro Mifune in The Seven Samurai. The villagers respected him and were happy for the protection... but it wasn't exactly cute and cuddly.
So yes, despite all of the highlights and saving the franchise and having a ballpark built for him... I believe a World Series title would make Lincecum more popular than Bonds. 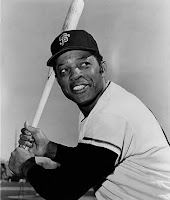 Willie Mays?
OK, Willie in many ways will be remembered more as a New York legend than anything else... and he delivered a World Series title in the Polo Grounds but never did on Candlestick Point.
But it was hardly anything you could blame WILLIE for!
So even without a World Series title in San Francisco, he is considered not only to be the greatest all around player of all time, but also the very symbol of an era of pure joy and intensity.
No number of World Series titles led by Tim Lincecum can ever top that. 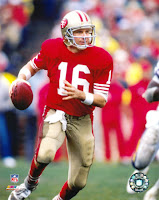 Joe Montana?
There may be more championships won in San Francisco... but there will never be another first.
Montana led the 49ers to the first ever San Francisco championship... then to the second... and the third... and the fourth.
Watch a Niner game in 2009 and chances are #16 will still be the most popular jersey.
Basically for San Francisco sports fans, he is a Beatle.
OK, so maybe my hypothesis is wrong. No matter what, Lincecum won't ever surpass Willie Mays or Joe Montana in San Francisco.
But lead a Giants team to the World Series title, then maybe his name could be brought up in the conversation.
(No pressure.)