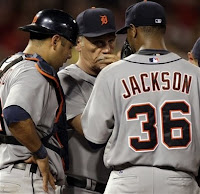 Does anyone look at the Tigers and think they are legit pennant contender?
I mean they are the only team above .500 in the AL Central in mid June... so you'd think they'd be considered a playoff team.
Yet who out there thinks they'll be at the top at the end of September?
The Twins are inevitably going to go on a roll and pass this Tigers team, right? Or maybe the White Sox will get hot.
At the end of the year, we'll forget Detroit contended at all.
Right?
But then I thought back...
Last October, I saw how the Phillies got no respect at all even during the playoffs. Throughout the season the Angels, Red Sox or Rays were going to an inevitable showdown with the Cubs or maybe the Manny led Dodgers.
In the end, it was Philadelphia.
In 2007, the Rockies weren't on the playoff radar in mid September. In mid June they were a .500 team. And although they didn't win it all, they did raise a pennant.
In 2006 the Cardinals were beaten and bruised and were barely over .500 when they stumbled into the playoffs. Instead of meekly going out, they won a Series and all of the other playoff teams have been haunted ever since.

Remember how the White Sox nearly coughed up their big lead in 2005? There were even Chicago writers saying they had peaked too early and weren't going to be a playoff factor. Besides, the AL playoffs were going to be an inevitable Red Sox/Yankees ALCS rematch. Instead there was a parade in Chicago.
In 2003 at this point the Florida Marlins were a sub .500 team. By the end of the year they ousted the Cubs in the NLCS and then matched their World Series title total.
In 2002, the Angels looked good, but the class of the American League were the Yankees and the A's. Except that neither of those teams made it out of the Division Series and the Angels gave Anaheim, California AND Los Angeles a ring.
Are you beginning to see where I am going with this?
Chances are the team that will be celebrating in October will be one that makes us all say "Who saw THAT coming?"
Jim Leyland could push all of the right buttons.
Justin Verlander could turn it on and dominate in October the way that Cole Hamels did last year.
A hitter like Miguel Cabrera could catch fire and terrorize some pitchers.
There might be an unlikely hero who blasts his way into Detroit sports lore.
"A walk off home run by Don Kelly!!!"
So say it softly in your head, everyone expecting the inevitable Red Sox or Yankees World Series versus the Dodgers.
The team you just dismissed could be the one planning a parade.