Baltimore deserves better than the Orioles 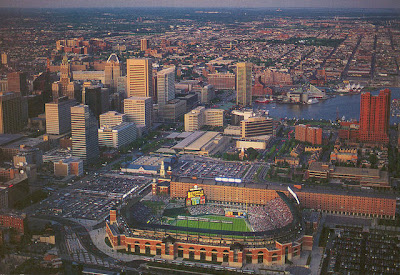 It is usually said that New York and Boston are the two biggest baseball cities.

ESPN usually says this, mainly because they are in Bristol, CT... right between New York and Boston. And while that media bias is as plain as the nose on my face, New York and Boston are bigger baseball cities than football cities... a rarity today.
Also St. Louis is usually lumped in with Boston and New York as a baseball first city. But most places seem to be football centric with the exception of Detroit (Hockey), Los Angeles (Basketball) and Seattle (Drinking Coffee.)
I will submit that the greatest sleeping fanbase in all of baseball are the Orioles.
Yes they love their football. The scenes in Diner with Steve Guttenberg quizzing his bride to be about Colts trivia rings true. And in the first Daily Show segment I produced, I went to Baltimore on the eve of the 2001 Super Bowl... and trust me, the city was excited about the Ravens.
But they really love their Orioles.
Remember in an 18 season span (1966-1983), this is a team that gave the city of Baltimore 8 trips to the playoffs including three World Championships and three other pennants.
But since back to back playoff berths in the 1990s, they have been irrelevant since Robbie Alomar was called out to end the 1997 ALCS.
This is the 12th straight irrelevant season for the birds. Peter Angelos has all but driven the proudest organization into the ground with horrific free agent decisions, a rudderless organization and a farm system that used to be the best in baseball and more most of the decade as been the most barren.
And often good seats are available at Camden Yards, the standard for new ballparks.
And yet... the Orioles fans are still there.
Remember these are the same fans who arrived at the airport in 1988 to greet the Orioles after they broke their 21 game losing streak to start the season.
And there is still an awesomeness about their fans.
Why?
Well yesterday I poked fun at the Orioles/Nationals series this weekend and said that if you went to the game, you'd never have to prove your loyalty to the Orioles again.
I saw the attendance for last night's game between the Orioles (on pace to finish 74-88) and the Nationals (on pace to finish 48-114).
It was 45.024.
I thought it was a typo.
I had to look it up in 3 other sites just to make sure it was correct.
Each one... 45,024.
Baltimore fans... color me impressed! I will from now on include Baltimore along with Boston, New York and St. Louis as the epicenters of baseball fandom.
Now Orioles management... take a look at that. The greedy Red Sox fan in me wants the Orioles to remain lousy because that would mean 18 games the Red Sox can win.
But for the sake of baseball... you have a fan base who will fill up your park in a lousy series. Put a decent product on the field. You've had 12 seasons!
And while you are at it... bring the smiling bird back.