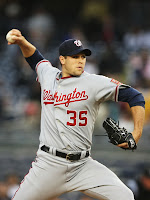 The other day I wrote that Craig Stammen, he of the 0-2 record and 5.86 in 5 career big league games, would come into Yankee Stadium and throw a perfect game because the Yankees bats turn to jelly when they face a new pitcher.

It wasn’t a perfect game… but 6 1/3 innings of shutout ball with no walks and his first career victory is nothing to sneeze at.

Holding A-Rod to zero hits in three at bats is pretty impressive although these days not such a rare occurance. (A Rod would finish 0-4.)

So once again… the existence of an advance scout for the Yankees can not be believed and a team that could rank as one of the worst in the history of baseball came into Yankee Stadium, took 2 of 3 and had three virtually unknown starters shut the Yankees down.

And despite my critics implication that Sharion Martis shouldn’t be included among the unknown and the lousy, I will disagree.

He was unknown in Yankee Stadium and his ERA would have been a decent credit score. A top line up in a band box ballpark should get more than 1 earned run in 6 innings off of him.

And before I am accused of not doing my homework… yes I know Craig Stammen, the pride of Versailles Ohio, put up good numbers in A and AA ball in 2008 and looked solid in Syracuse at the beginning of the year. But he was a struggling rookie in search of his first win.

A pitcher like that should get his first win pitching in a pitchers park like Petco against a lame hitting team like the Padres… not shut down the supposedly powerful Yankees.

Tonight the Yankees face Sean West… a rookie who has pitched 5 games in the bigs.

How could the Yankees POSSIBLY beat him?