I am grinding my teeth and I shouldn't 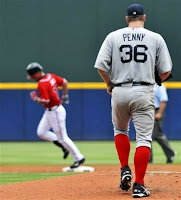 To be fair, Sunday's game should not have been a teeth grinder. The Red Sox had won another series... and they got a solid performance from Brad Penny (showing once again some of Theo's best trades are the ones he DOESN'T make.)
But here I sit Monday afternoon grinding my teeth.
Why?
Shouldn't I be encouraged that the Red Sox went in, took 2 of 3 and the one game they lost they got a good pitching performance from Penny but faced a young hot pitcher in Tommy Hanson?
(Are Braves fans still mad that it is Hanson instead of Glavine in the rotation?)
But I'm mad.
They couldn't score 2 more runs? They left the bases loaded in one inning and had the tying run on in the 9th.
Oh who am I kidding? I'm not grinding my teeth because of the Red Sox! They did a good job in Atlanta. If you take 2 of 3 every series, you'd win 108 games!

I'm grinding my teeth at the Mets!
Seriously Mets... you couldn't win ONE GAME at home?
Really? Thanks to the Castillo drop the other week you lose 5 of 6 to the Yankees?
With two games left in June you are at even .500?
YOU FACED CHIEN MING WANG!!!!! He went into last night's game with as many wins in 2009 as Harry Morgan!
(By the way, with all of the recent celebrity deaths, isn't it odd that Harry Morgan is still alive? Did you know he was? I just assumed he died. But I digress.)
How bad is the Mets offense?
Let me put it this way... the Mets drove in 3 runs all weekend.
Mariano Rivera drove in 1.
Rivera matched 1/3 of the Mets offense.
That is grotesque.
Some of the Mets are begging Minaya to make a deal.
What for?
They are a .500 team. They should be dealing VETERANS!
Oh well... it's not entirely the Red Sox fault that they have to sweep a team in order to hold serve... but this isn't about fairness. This is about whether or not my teeth are grinding.
With sadness I update the board.