Does Tim Wakefield have 20 wins left in him? 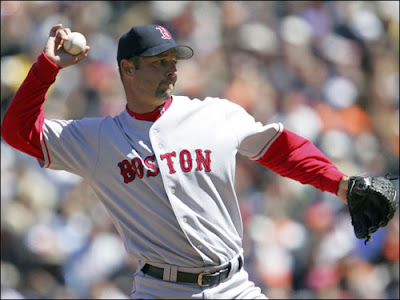 Wakes won again… making my case for him being the ace of the team this year even more intriguing.

He’s got 9 wins, second only to Roy Halladay and might finally make his first All Star team. (How was he NOT an All Star in 1995? He was third in the Cy Young vote that year!!!)

I have already written about the underrated awesomeness of Tim Wakefield’s tenure in Boston.

And one that just sounds strange despite 15 seasons in Boston and playing a big part in 7 Red Sox playoff teams including two World Series champions.

He could be the greatest winner in Red Sox history.

Not the greatest pitcher. That title is debatable.

But imagine asking the question “Who has won the most games in Red Sox history?” and having the answer being “Tim Wakefield!”

Now right now, I think the fact that there is a tie at the top is kind of cool.

I want him to get those 20 wins and pass Clemens and Young.
Wakefield already has a lot of Red Sox records… ones that I’m sure he’d like to give back.

Most homers… most losses… most walks… most hits allowed… most earned runs… most wild pitchers… most starts that made Red Sox fans say “Oh PLEASE don’t suck today!”

And yet he is a stand up guy and a champion.

He deserves a great title. The most wins in Red Sox history would be kind of cool, don’t you think?

It might earn him a retired number without a Hall of Fame entry (a la Johnny Pesky.)

So let’s start the countdown! 19 to tie… 20 to pass Clemens and Young.