Is Omar Vizquel a Hall of Famer without a qualifier? 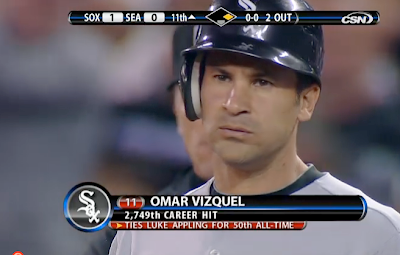 Last night Omar Vizquel drove in the go ahead run in a game where the White Sox would ultimately lose in extra innings to the Mariners.

I was watching the game and the graphic above caught my eye.

Omar Vizquel is tied for 50th on the all time hit list.

I had to rub my eyes for a second to make sure I didn't see that incorrectly.

There have only been 49 people with more hits than Omar Vizquel in the history of the major leagues.

Only 2 players in the history of baseball who are eligible for the Hall of Fame have that many hits and are not in Cooperstown.

Vada Pinson and Harold Baines, who was Vizquel's teammate in Cleveland and now is one of his coaches for the White Sox.

Now earlier I wrote about how if Harold Baines got 7 more hits in each of his seasons, he would have had over 3,000 hits and be in the Hall of Fame.

But Baines was a pure hitter. He was a DH for almost his entire career and even as a hitter, he very rarely was considered to be one of the elites.

Vizquel has been one of the elite shortstops for a generation.
He has the 11 Gold Gloves to prove it. When I wrote about who should be in the Hall of Fame in 2007 and 2009, I put Omar Vizquel on the edges saying in 2007:
"His Offensive numbers haven't even come close, but has there been someone who has been such an overwhelming DEFENSIVE prescence as Vizquel for the past 17 seasons? That should count for something!"

And in 2009:
"His defense was so good he might make it in. It would be nice if he was more of a threat with the bat."

Well if he can be listed among Hall of Fame names in the hit column with pure hitters, then maybe he belongs in!

And Luis Aparcio and Ozzie Smith and Bill Mazeroski are all in the Hall mainly for their gloves... and Vizquel has surpassed them in the hit column.

This is his 22nd season and his 4th decade in the bigs and can still pick the ball. And while his .276 average isn't making Josh Hamilton nervous yet, it does show that he probably has a few more years left.

Either way, consider myself sold.

Omar Vizquel belongs in the Hall of Fame.

I say it and I stand by it.