Hey Dodgers... what is wrong with this picture? 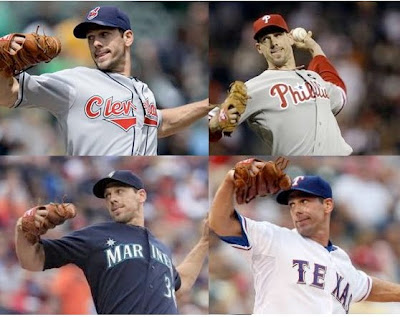 On July 21, 2009... less than a year ago, Cliff Lee was a pitcher for the Indians.
He threw a complete game 2-1 victory for the lowly Indians and as the defending Cy Young winner was on the trade block.

And the Dodgers, who made it to the 2008 NLCS, desperately needed an ace pitcher. They had some decent pitching but were also leaning on the Clayton Kershaws and Chad Billingsleys too much. They needed a stud to put them over the top.

He was traded to the Phillies 10 days later... and threw 8 shutout innings in the NLCS against the Dodgers.

He's been traded three times in the past year.

The Dodgers still desperately need a #1 starter.
Cliff Lee would have been PERFECT ace for the Dodgers. They may have won the 2009 NL Pennant and probably would be in first place as I type this instead of being in 4th place, 6 games back of the Padres in the loss column.

And yet with the need for Lee, the minor leaguers to trade, the pitchers park for him to thrive and the big market to resign him.

And how many proposed trades did we hear involving the Dodgers?
That would be ZERO!!!

Hey Frank McCourt... remind us how your divorce isn't affecting how the team is put together again?