Not a fan of the white hats... but it worked on some teams

Once again baseball busted out the white hats for patriotic reasons and as I said before, the players looked like the Good Humor Man.

Teams like the Yankees should NOT have white hats. They have an amazing uniform that shouldn't be messed with.

But I confess, as bad as most teams looked with the white hats, a few teams actually pulled it off and maybe it would be a good look in the future. 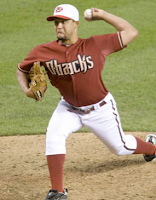 I thought it worked well with the Diamondbacks.

The white hat with the Red Jersey looked kind of cool. Plus the team is trying to build a new identity, especially with Kirk Gibson in charge. Why not have a new look?

I think it would work better with their A instead of the snake D on the cap.

But it works for the snakes.

It looked surprisingly good with the Tigers as well.

I didn't think I'd like it with a traditional uniform like Detroit's (along with the Yankees, Dodgers, Cubs, Red Sox and Giants are the best of the traditional unis).

But the white hat did invoke some nostalgia.

It looked like the hat they would have worn in the Charlie Gehringer years.

Go with it as an alternative cap, Detroit. 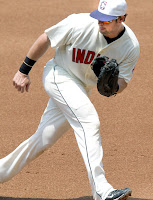 Speaking of traditional teams, I think it went surprisingly well with the Indians.

It harkened back to the 1920 World Champion Indians and Stan Covelski would look good wearing it.

Granted I am being a hypocrite.

I have told the Indians to pick a cap and then suggested two more versions for them... but hey it is my blog.

I know I trashed them before, but to quote Rodney in Caddyshack, "It looks good on YOU though."