Did the Astros blow it? 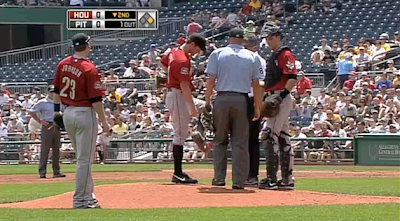 I've been saying the Astros should deal Roy Oswalt since before the 2009 season... and I've been adamant about it.

And I warned them that if they wait too long they could end up like the Orioles with Brian Roberts... where he was the prime trade chip but they never pulled the trigger. And now he is hurt and has no value.

Well look what happened today. He has a ball hit his ankle and shortens his day.

Now it isn't going to bring back memories of Dave Dravecky's arm snapping, but if he comes back in his next start and stinks, then any trade suitor might think he is damaged goods. And with only 2 weeks until the trade deadline, even one bad start could torpedo a trade.

In other words, the Astros, who should have been wheeling and dealing in the spring, could be sitting on a #1 starter trade chip at the deal deadline and won't be able to move him.

Yeah yeah yeah, his contract is big. Something could have been worked out. The Padres got a bunch of solid young players, including Clayton Richard, for Jake Peavy.

Almost every team could use a pitcher like Oswalt... and they may have let this chance to get a building block or two slip away.

To paraphrase Robert DeNiro in CopLand, you had a chance to deal Roy Oswalt AND YOU BLEW IT!