Does Kevin Cash belong in that elite group of Red Sox/Yankees champions? 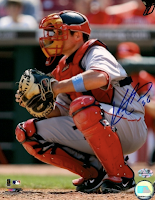 The Red Sox today welcomed back old friend and knuckleball catching specialist Kevin Cash in a deal with Houston.
With Victor Martinez hurt, it is good to have someone with big league experience backing up "The Lobster" and catching Wakefield (who goes tonight in search if his 178th win in a Red Sox uniform.)
Cash was on the 2007 Division Series roster but didn't get into a game. (He played and homered in the 2008 ALCS for the Sox.)
So he earned a ring with the '07 Red Sox.
But remember, he also played for the 2009 Yankees... which as painful as it is to remember... also won the World Series.
Now he only played 10 games for the Yankees that year and was released in September... but I wonder if he got a ring from the Yankees as well.
I guess he would join Ramiro Mendoza, Johnny Damon and Eric Hinske as the only living players to get a World Series ring as a player with the Red Sox and Yankees.
But I have a hard time putting him in that list because Mendoza, Damon and Hinske were all on the active roster for the post season while Cash was cut from the team before the season was over.
It's the sort of thing that a lunatic like me thinks about at this late hour.
Either way, welcome back... and don't get hurt.