Say what you want about Derek Jeter... he gets it 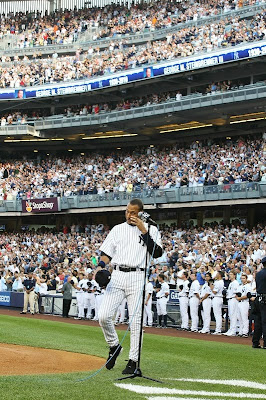 He's a guy who understands exactly who he is and what his role is with the team.

He knows that he represents the link to Gehrig, DiMaggio, Mantle, Berra and Ford.
He knows that when there is a tremendous shift in Yankeedom, they don't turn to A-Rod or the latest superstar.

Losing Steinbrenner AND Bob Sheppard back to back? That's a double punch that nobody could have imagined.

He is self aware of his role and knows that someday he'll have a monument out there.

He's entered that territory for Boston fans that Magic Johnson eventually entered:
You couldn't stand to face him, but you have to respect him.

And to think the Marlins almost got him for Bryan Harvey!