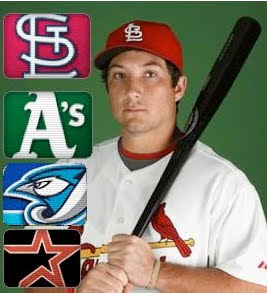 It's hard to figure out.

Brett Wallace could very well become a superstar hitter in the big leagues one of these days... Where he will play is anyone's guess.

Since being picked by the Cardinals in the first round in 2008, he was touted as one of the best power prospects in the bigs.

He has yet to play a single game in the bigs (still trailing Jon Ratliff in that category) and has been declared the future for 4 different teams.

He's the future power slugger for the Cardinals... no wait he's going to be the new basher in Oakland... did I say Oakland I meant Toronto... or maybe Houston!

After the Astros flipped one of their Phillies prospects in the Oswalt trade, Wallace can now claim he has been involved directly or indirectly with trades for Cliff Lee, Roy Halladay, Matt Holliday and Roy Oswalt.

But does he have the "Crazy Single Hot Girl" aura around him?

You know when you meet a really hot girl who is single and think "Man, how lucky am I? I can't believe she is available!" Then you start dating and you realize "Wow, now I know why she's single. I got to get out of this!"

Kind of like the careers of Kyle Farnsworth, Terrell Owens and Stephon Marbury.

Do the Cardinals, A's and Blue Jays all know something that the Astros are going to find out?
Or is he really that good a prospect?

If he is traded again, I am declaring because he is too fat.

Don't believe me?
Check out my post about Wallace I made last year.