The steroid era is ending... so hopefully is the excessive celebration era

With pitching dominating and home run totals getting back to normal, we are seeing baseball finally getting out of the steroid era.

And thanks to Kendry Morales and Chris Coghlan we might be saying good bye to an era of stupid celebrations.

Look, I am not against having fun or even a fun spontaneous celebration. But I am glad to see home run celebrations muted a little after Kendry Morales put his career in peril due to a walk off homer leap.

And with the Angels offense sputtering, you think they could use his bat these days?

Not every game ending shot should be treated the same as Joe Carter's homer. 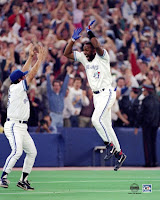 And I wouldn't mind seeing people celebrate things like walk off homers a smidge more sincerely.

Wouldn't it be more interesting to see the players celebrate based on what they would actually do instead of a carefully choreographed dance.

I want to see ball players thrilled at winning on the last swing of the bat, not Riverdance.

The only thing that Morales can take comfort in this year is that Chris Coghlan found a stupider injury in a post game celebration.

He wasn't even the hero of the game. He was trying to shove a cream pie in the face of Wes Helms. And somehow he busted his knee.

I don't even know how that is possible.
Did he have the pie on his knee?

But this is a recent tradition that I can do without. The pie in the face may have been funny once or twice, but like the bucket of Gatorade on the winning coach, it has become such a cliche that it is a joyless obligation rather than a fun ritual.

And Heaven forbid a guy be interviewed with a little dignity after getting the game winning hit. I would have love to see these guys pull that on Eddie Murray or Kirk Gibson after a game winning hit.

Or if you are going to do something... be original. The Keystone Cops thought pies in the face were hack.

But something just hit me... the steroid era is ending and dudes are getting hurt celebrating?

Maybe they are getting hurt because they are no longer juiced.

Better not try a forearm bash!