Earlier in the morning I carefully crafted an All Star Roster for the American League. I weighted pros and cons and put together reserves and a pitching staff that represented each team, had depth and a chance to win.

This NL Roster?
I am slapping together at the last minute.

It's my algebra days all over again! I'm doing my homework on the bus, sneaking it in under the wire.

I want to get this one written before we have a big Sullivan family barbecue.

If a player was voted in by a fan, I will make a note... if not it was chosen by the staff at Sully Baseball.

(Keep in mind Chase Utley and Jason Heyward will be voted in by the fans but injured come game time... so we picked their replacements.)

So here we go! 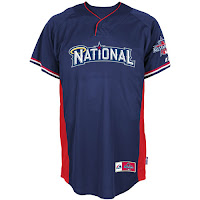 I am sure I left someone obvious off the team, but I slapped this together.

And yeah, I put R. A. Dickey on the staff. I know you could probably throw another name at me... but Dickey has had a terrific year and I want to see a knuckleball pitcher throwing the AL Line Up... so sue me!

Have a great 4th of July!