I have to admit it... the Yankees do Old Timers Day really well 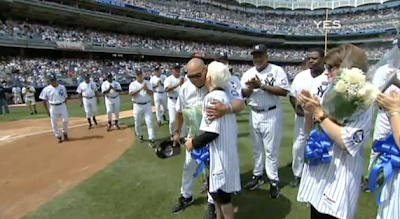 All those years I lived in New York, I never missed watching a Yankees Old Timers Day on TV. You may hate the team and curse them out... but they do ceremonies quite well.

And while it sucks that they have 27 World Series titles, you would think that every year would be a 10th or number divided by 10 anniversary of a title winner.

But the Yankees have yet to win a title in a year ending in 4 or 5.
That's strange, isn't it?

Either way, it's of course great to see Hall of Famers like Whitey, Goose and Reggie there.
But it was also amazing to see lesser Yankees get their due. The Hector Lopez's, Aaron Smalls and Homer Bushes of the world got nice hands.

You put on a good show, Yankees.
And the loss afterwards made it even better.