If the Tigers miss the playoffs by a game, blame Nelson Cruz

With both the Rangers and Tigers each battling for a Division Title, a game here or a game there could make the difference between playing playoff baseball or playing golf in October.

Which is what made last night's extra inning game between the Rangers and Tigers to be so fascinating.

I was listening to the game on my XM radio on the way home from work and in the 11th inning, man it seemed like the Tigers had it in the bad.

Tied 6-6 with 2 on including Johnny Damon at season, Brennan Boesch dropped a single to right field for the game winning hit... except it didn't win the game. 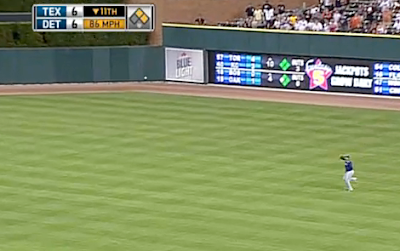 Right fielder Nelson Cruz held his glove up as if he was about to catch it...

Even though the ball was about to fall 15 some odd feet in front of him and land in the no man's land between center field, right field and second base.

And a smart base runner with speed like Damon could score easily from there. 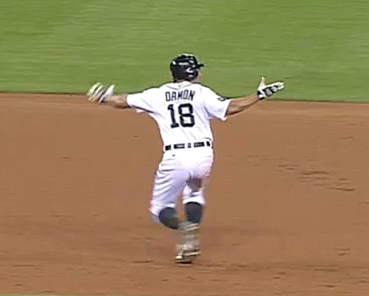 But Johnny Damon did the Alley Cat, going back and forth and at one point holding up his hands in confusion not knowing where the ball actually was.

In someways it was reminiscent of the Lonnie Smith being duped by Chuck Knoblauch and Greg Gagne in the 7th game of the 1991 World Series.

Cruz out foxed the Tigers and a double play later the Rangers were still alive...

And Texas would win the game on a homer by, who else?, Nelson Cruz.

I know it is only one game, but it was a game where the Tigers WON! They did get the hit to drive the run. Physically they did it.

But a little deception helped turn it into an L.

And for a lot of members of the 2010 Tigers, they don't have to look that far back to know how much one game could mean...

Just imagine if the 2009 Tigers won one more game.

Keep this game in mind if they miss by a single game again.