Look, I am happy the Yankees lost but... 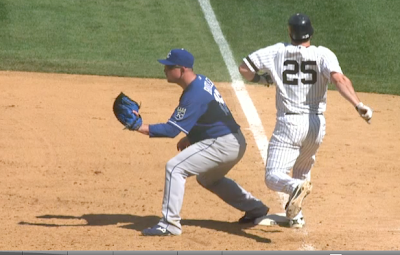 The Royals beat the Yankees today and frankly, with KC on pace to lose 92 games, they need all the help they can get.

But when Mark Teixeira hit a difficult grounder with 2 outs and 2 on and the Yankees down by three, he beat out the throw to first base.

I thought it was the case with my naked eyes and less than one minute later no fewer than two replays showed he was clearly safe.

He was called out.

The Yankees would have had the bases loaded, 2 outs, Yankees down by 3 and A-Rod up, knowing an out would win the game for the Royals but a grand slam would win it for the Yankees.

But alas we can't have it because we can't waste that minute.

Ahhh the insanity of no instant replay.