The All Star rosters are going to be announced today and inevitably there will be a lot of people ticked off at the results.

And there will be people angry at the popularity contest that is the fan votes.

And also people will hate that every team needs to be represented.

All predictable reactions…
But I am not going to bitch and moan. Or at least not yet. I am going to assemble my All Star Roster for the American League and post it before the real one is announced.

And I will use the current All Star rules.
In other words the starting line up will be as voted by the fans and each team will indeed have a representative.

I'll pick 24 reserves and pitchers for the AL.

And seeing that homefield advantage in the World Series is on the line, I am putting together a teamwith a shot to win.

So let's put together the 2010 American League All Star Team... 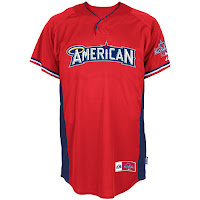 PITCHERS and RESERVES
(As selected by the Staff of Sully Baseball)

There you have it.
Each team is represented and each position has an able back up. The rotation and bullpen are deep and there is a pair of reserve catchers.

You might be asking, "Now dear Sully, why are you only doing the American League?"

Because I am tired and I want to go to bed.