Can the Mariners take advantage of the Phillies and Red Sox misfortune? 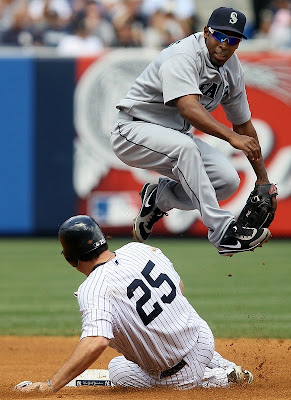 As Jeff Passan pointed out in his column, both the Phillies and the Red Sox have gaping holes at second base and in their clubhouses with the losses of Chase Utley and Dustin Pedroia.

They have lost some spark, some intangibles and in many ways the heart and soul of their teams for the time being. And the Phillies and Red Sox each have big expectations this year and can't afford to fall to far off the pace.
And as anyone can tell you, there is no better time to take advantage of someone then when they have had a little misfortune.

Which brings us to the Mariners.

The little team that could have but didn't is going to unload Cliff Lee soon and make a contender happy.

But what about Chone Figgins?

Perhaps going to a winning team and feeling reenergized is what he needs to do.

Either way this is a guy who finished in the top 10 if the AL MVP vote in 2009. He is a switch hitter with a lot of speed and post season experience.

If Pedroia or Utley come back from their injury, he can fill in to another spot on the infield or outfield with ease.

And if he gets the spark back and fits like a glove with his new team, he will be under contract for the next few seasons.

I'm not saying it is GOING to happen... but it would behoove the Mariners to see if they'll go along.