Why am I rooting for the White Sox? 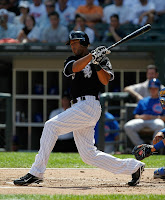 Anyone who reads this blog (and I know I do) you know that I am a Red Sox fan, but I also follow each race and inevitably I root for a team in each race.

The Giants are my second favorite team, so I always root for them.

And there are teams like the Cardinals, the Braves and the Angels that I don’t really like, so I’ll root for someone to beat them.

And of course I always root AGAINST the Yankees.

I have no reason to dislike any team in the A. L. Central, so logic dictates that I would be rooting for the team that has the most compelling narrative for their fans.

With the crushed city of Cleveland getting no relief from the Indians and the Royals clipping coupons, the race is down to the Twins, the Tigers and the White Sox.

You’d think I’d be rooting for the Twins. After all, I rooted for them big time in 1987 and 1991. The Twins winning would contiue to be a gigantic middle finger to the threat of contraction 9 years ago.

The Twins have won 5 Division Titles in the past 8 seasons and missed another Division Title in 2008 when they lost a one game playoff 1-0 to Chicago.

Plus with stars like Mauer and Morneau and the team playing outdoors, it makes the Twins the obvious choice for me to root for. (Not to mention that my current boss, Craig Kilborn, is from Minnesota and is a life long fan.) 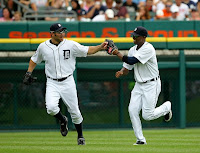 Or maybe you'd think I'd be rooting for the Tigers...

The city could use a pick me up, the team was potentially cheatedout of a playoff spot last year. Plus they are a traditional team with great old unis... and play for a city that let's face it has seen better days.

Plus Jim Leyland is a borderline Hall of Famer as of now. Maybe another trip to October would clinch a ticket to Cooperstown.

And as I said before, I would have no problem seeing either of those teams going far in the post season.

Yet strangely when either one of those teams play the White Sox head to head... I find myself rooting for the White Sox.

And when I see the White Sox gain a game in the standings, I give a little fist pump.

Of the three contenders, I want to see the White Sox win the American League Central.

It isn't because I picked them at the beginning of the year.

I picked the Yankees to win the Division as well and you don't see me cheering them on!

And it clearly isn't because of a Post Season drought as they won it all just 5 years ago. 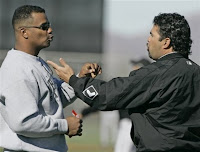 I guess I like how Kenny Williams and Ozzie Guillen do business. I like that come trade deadline, Kenny is not afraid to trade off young players.

Maybe it is because Kenny knows that there is no time like the present to have the White Sox contend and steal as many casual Chicago fans as possible.

Or maybe it is because he himself was a heralded prospect who never turned into a star player and he knows that sometimes a big league definite is more valuable than younger potential.

And I have not been shy in saying what an Ozzie Guillen fan I am.

I like that he is a little crazy, is the face of the team and guess what? If he wins a few more divisions and another pennant, he might be putting together a Cooperstown resume.

Wouldn't that be an amazing day in Upstate New York seeing Ozzie enshrined?
He's not there now (although he HAS matched Hall of Fame managers Earl Weaver, Leo Durocher and Whitey Herzog in World Series titles) but I want to see him pad his resume. 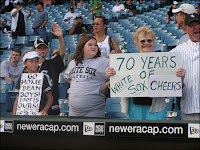 Maybe I am rooting for the White Sox because I have a soft spot in my heart for their fans.

As I wrote in my "Why Doesn't Anyone Love The White Sox?" post a few years ago, the South Siders get such little love that it is kind of startling.

If you meet someone from Chicago, it is almost assumed they are a Cubs fan. It's more pronounced than even the Yankees and Mets disparity in New York.

There is nothing cute and cuddly about the White Sox and if you have rooted for them over the years, you are clearly not a front runner nor doing the fashionable thing.

And I am guessing a lot of them are enjoying the possibility of making the post season AGAIN while the Cubs are imploding.

Or maybe I am rooting for the White Sox because I want SOME kind of Sox in the playoffs!

Whatever the reason is, I am hoping the playoffs go through Chicago in the American League. Baseball is emotional and logic sometimes is thrown out the window.

All I know is the White Sox were playing the A's last night... and I am hoping the A's win the West... yet when I saw it was a Sox win, I gave a little fist pump.