Last night was a super rotten night for the Red Sox and their fans... but I at least had a prediction come true and had at least something fun happen in an ugly loss.

My wife and kids are up north for a few days so living like a bachelor, I decided to swing by Sonny McLean's in Santa Monica and watch the Red Sox game with my people.
The Sox were tied when I showed up and in the middle of a rain delay. Then Beltre homered for the Sox and briefly there was a lead.
And then I got some company. 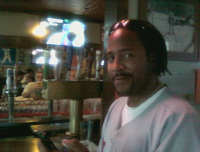 My good friend, writer for the Santa Monica Free Press and former 5th grade classmate Kenny Mack arrived.
And the second he showed up, the Red Sox blew the lead.
He blamed himself.
I just relay the facts.
The game was ugly for so many reasons... not the least of which was the number of players wearing #50 and higher.
With all the injuries on the team it looked like a split squad spring training game.
There were too many Eric Pattersons, Kevin Cashes, Ryan Shealys, Felix Doubronts, Fernando Cabreras and Dustin Richardsons for my taste.
I kept thinking "Where's Beckett? Pedroia? Buchholz? Ellsbury? Varitek? Martinez?" and expecting the answer to be "Oh they are on the squad playing in Jupiter."
The Sox put a few feeble rallies together but couldn't cut the lead down.
And up stepped Bengie Molina.
His Grand Slam turned a tie game into a 4 run hole and by the look of how his uniform fit, he had also experienced a few Denny's Grand Slams since coming over from San Francisco.
The NESN broadcast showed he had doubled, singled and hit the grand slam.
I said "Watch. He's hitting a triple here."
Kenny witnessed it. As did the people at the bar.
Now last year I wrote about Bengie Molina's ability to triples. He had 5 career triples (in 4,997 plate appearances) going into that at bat.
"He's going to do it" I yelled.
And then it happened... a drive to center field into the triangle... a place where anyone could run out a triple.
And it bounced off of Patterson's glove in centerfield and it was off to the races with Molina.
I think James Caan in Misery would have been lighter on his feet than Molina. 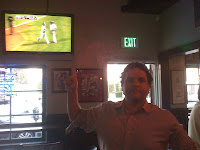 And there he was on third.
And I called it.
Now granted I was calling it somewhat tongue in cheek. But hey! I'll take the credit.
The only question was was the official scorer going to call it an error or a triple. Kenny was convinced it should be called an error.
I kept thinking "Come on scorekeeper! Give him the triple!"
And he did.
I thought of the scene in 1776 when the anonymous Judge Wilson realizes his yes or no vote would determine whether or not America would have its independence. He votes yes because he couldn't take the responsibility of saying no.
That was the scorekeeper. He didn't want the responsibility of denying Bengie Molina the triple and the cycle.
(Trust me that analogy makes perfect sense.)
Oh well... this season is slowly inching towards "Lost cause ville"
Go to 5:00 of this clip and keep in mind that one "no" vote from a state would kill the Independence movement. It's a great (albeit not letterboxed) scene. Then you will see how brilliant my analogy is.
(Trust me.)