Once again, Daisuke Matsuzaka has only one bad inning 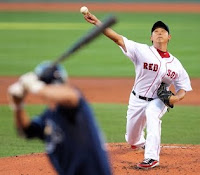 About a month ago, I wrote about how 91% of the innings Daisuke Matsuzaka has pitched have been pretty good.

I wrote about how if you took out 4 1/3 out of his 49 innings pitched, he would be putting up Cy Young caliber numbers.

Last night? More of the same.
He pitched 5 shutout innings last night and let up 3 runs in one inning.

Yes I know this is an insane exercise... but I am telling you, if Dice-K can avoid that one bad inning, he could be pitching like a bad ass. Or at least someone worth about $9 mil a year.