Baseball swings and misses with Strasburg and the All Star game 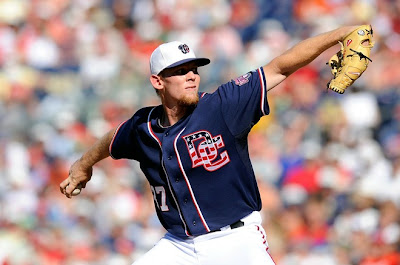 Stephen Strasburg is not on the All Star roster.
Of course he isn't.
Why would he be? It would just make the All Star Game more electric, more fascinating and exciting.

Why would baseball want to do something like that?

Why would you want to have a phenom who has faced virtually NOBODY on the A.L. All Star team and have some fascinating head to head match ups?

Why would you want to have a moment where the player that is filling up stands in places like Cleveland and Washington play on the grandest stage while the interest of him is at a peak?

Why would you do something like that? Why would baseball want TO DO SOMETHING SMART?

And spare me talking about his win loss record. The Nationals have scored a grand total of 3 runs for him in his last 4 starts COMBINED!

And I don't want to hear about how the All Star Game roster spot needs to be for a truly accomplished player. The fans voted in Kosuke Fukudome one year.

Jose Offerman is a 2 time All Star. Tyler Green made an All Star team.

Were fans glued to the TV thinking "Oh boy, I hope Jose Rosado gets into this game."

And also spare me the whole "He'll make the All Star Game later" nonsense.
He will NEVER have this sense of mystery and freshness. It's a once in a lifetime opportunity to have Strasburg face the A.L. All Stars for the first time... and they blew it to give Matt Capps a spot on the team.

No offense to Matt Capps... but what do you think will be a more memorable moment...

Strasburg versus Jeter, Guerrero and Mauer
Capps versus Ty Wigginton?

You blew it baseball.
Swing and a miss.