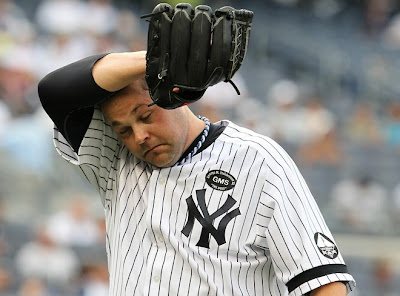 Joba Chamberlain is still a Yankee... and sometimes you have to wonder why!

Seriously... the Yankees could have used him to acquire Johan Santana.
I bet he could have fetched Cliff Lee... twice.
Or Roy Halladay.

They kept him instead of getting Dan Haren.

Seriously! Why hold on to this pitcher who is clearly regressing? Why hold on to him so he can be shifted back and forth from the pen to the rotation to where now he is actually no longer good at either?
He was a mediocre starter last year... and this year the Yankees can only hope he can RISE to the level of mediocrity as a reliever.
He coughed up a homer to Scott Podsednik which is hard to do.
Near the beginning of July he LOWERED his ERA to an inexcusable for a reliever 4.95.
In less than 2 weeks, it climbed back up to 5.95... which is "Can we send him back to AAA?" territory.
Have you noticed that the Yankees are pursuing either a #4 starter or a set up man? Wasn't Joba supposed to fill ONE of those roles?
Back in March I suggested the Yankees trade Chamberlain just out of mercy.
About a month ago, I suggested the Yankees swap him for another underachiever, Franklin Morales.
But now I am saying "Yankees... keeping Joba instead of trading him for an established star pitcher is insane."
He's been with the team over the past 4 seasons and is regressing.
Yeah, he's only 24 years old, but shouldn't he be showing signs of being even an adequate big league pitcher at this point?
Next time someone offers you an ace caliber pitcher and Joba is the centerpiece of the puzzle... take the trade.
Or keep him. Most pennant contenders would rather have a mop up man with an unsightly ERA to a #1 starter.