Dawson is the second Expo in the Hall... Rock should be the third 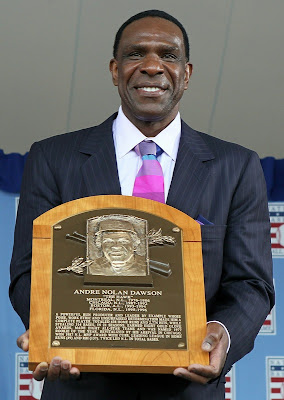 Andre Dawson finally got into the Hall of Fame and today was enshrined. It took 9 ballots (and no doubt some anti Steroid sentiment put Dawson and Jim Rice over the top) but he's in... and he's in with an Expos hat on his plaque.

Now I am not sure if he wanted that hat... maybe he wanted a Cubs hat (or a Marlins hat as he is currently an employee of the Marlins) but he joins his former Montreal teammate Gary Carter with that weird ass M logo.

The Expos are sadly no more. They haven't played a game in Montreal since 2004. But there is still a Hall of Famer out there who should have the Expos cap on his plaque. 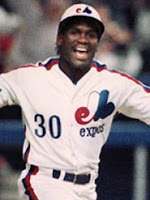 Tim Raines belongs in the Hall and don't make the poor guy squirm.

He didn't make it in his first two ballots, but that's enough. His numbers won't change and they are good enough to be in.

He got base, created more runs and used his speed better over a stretch of time longer than a decade better than anyone not named Rickey Henderson.

Put his stats up next to any player in the 1980s and he'll hold his own.

Take into consideration that he cleaned up his drug past and became a key veteran contributor to the 1993 AL West Champion White Sox and the 1996 and 1998 World Champion Yankees and you have the intangibles along with the numbers.

I am going to paraphrase John Travolta and say LET HIM IN.