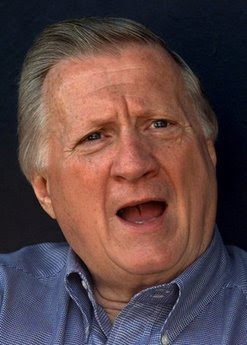 George Steinbrenner, a unintentionally a showman to the end, died on the morning of the All Star Game. Nobody knows how sick he has been over the last few years as his public appearances have been more and more seldom and his sons Hal and Hank have been running the show.
But now the Boss is gone. And so is a baseball era.
I know I am a Red Sox fan and my blogpost title might have some people think I am going to write a snarky sarcastic piece... or that I am going to try and say something polite out of respect for the recently departed.
But I'm not. I am 100% sincere when I say that when George Steinbrenner took over the Yankees in the 1970s, it was a great moment for baseball in terms of popularity, passion and making the game more fun.

Think about it... for Yankee fans, the franchise turned around twice under his leadership. When he took over the team in 1973 from CBS, the Yankees were just another team. They were 9 years removed from their last pennant and they lagged far behind the Orioles, the Tigers and the mighty Oakland A's in the American League... and the great Yankee Stadium was crumbling.
By the time of his death, the Yankees once again were the gold standard of baseball, winning titles in the 70s, 90s and 2000s with superstars both homegrown and acquired.
Yeah, George had his bad qualities as an owner. His insane merry go round of managers in the 1980s, his gobbling up of free agents from Catfish Hunter to CC Sabathia, and his treatment of Billy Martin, Yogi Berra, Dave Winfield and Joe Torre inexcusable.
But wasn't that part of what made the Yankees of the 1970s, 1980s, 1990s and 2000s fun?
And for the rest of us... it was made the Yankees fun to HATE!
For whatever reason, Yankee fans have never seemed to embrace that they are the bad guys in baseball... the villains. But do you know who DID? 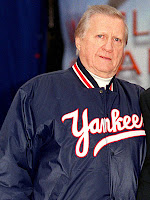 George M. Steinbrenner.
He got it. He understood that role the Yankees play in baseball. As I wrote before, the resentment for the Yankees started long before Steinbrenner took over the team. There's no musical called "Damn Orioles."
But with Steinbrenner the Yankees assumed the role of the monolithic team that everyone wanted to see and beat.
First with the Bronx Zoo, then with the efficient Torre Years and now with the star studded Jeter/Rivera/A-Rod teams, people love to root AGAINST them.
Don't believe me? Check out the Yankees road attendance. Look at places like Oakland or Kansas City or Seattle or Cleveland when the Yankees come to town. There is always a spike in attendance. The teams charge more for tickets because they know that fans want to see their team beat the Yankees.
The Dodgers wouldn't sell single game tickets for the Yankee series... you also had to buy tickets for a less desirable match up.
Like any James Bond film, the better the bad guy, the more exciting it is. And Steinbrenner was always the one to absorb the blows as the Oil Can Harry figure of the team. Whether it was in his crazy press releases, hosting SNL or getting a kick out of being a character on Seinfeld, he understood his role.
It was tough to hate quiet professional stars like Jorge Posada, Andy Pettite, Mariano Rivera and Bernie Williams (although I found ways to)... but George was always a punching bag and he seemed to relish it.
The biggest dips in baseball's popularity were in the late 1960s and the early 1990s... and in both times the Yankees were lousy. Is that a coincidence?
It's tough to get worked up when the bad guy is the Oakland A's or the Baltimore Orioles.
As for the biggest complaint about him... the fact that he spends the most on free agents on payroll, let's not sidestep that.
Yeah, the payroll of the Yankees is obscenely high. Even more obscenely high than my beloved Red Sox who are as gluttonous as John Belushi circa 1981.
Let me ask you something though... do you think Steinbrenner is the richest owner in the game? For years that was Carl Pohlad of the Twins who let his players jump ship left and right and threatened to contract the team.
Who is a bigger disgrace to the game? George Steinbrenner for making every off season somewhat of a circus? Or the Pirates management pocketing revenue sharing and playing in a tax funded stadium while putting an unwatchable product on the field for nearly 2 decades?
And if you think that just playing in New York makes you a winner, then you should have some conversations with some Mets fans... or Knick fans... or Ranger fans... or Jet fans.... (Imagine if you were a Met/Knick/Ranger/Jet fan... Lord help you.) 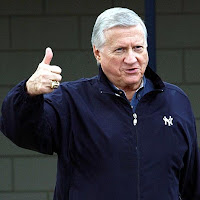 As with most of the Yankee resentment, there comes a certain amount of jealousy. I know this as a Red Sox fan... I wanted the Yankee titles and all the Yankee stars to come to Boston. And when people started saying the Red Sox were evil like the Yankees I LOVED it.
Let's face it, Sox fans... Steinbrenner and the Yankees raised the interest level for the Red Sox as well.
In the late 1980s and early 1990s, the Sox main rivals were the Toronto Blue Jays. Yeah those pennant races were fun (especially the wild down to the last Brunansky catch season of 1990) but they were a mere sparkler compared to the fireworks of the late 1990s and 2000s clash with the Yankees.
The Red Sox became a national brand and the passion went through the roof. Part of that was the new ownership who sold the team to the public better than the moronic Yawkeys ever could. But they also had the perfect bad guy for Red Sox Nation.
Would 2004 have been as sweet if the Red Sox came back from 0-3 against the Twins?
Now of course I am heaping a lot of praise on how Steinbrenner ran the team over the years when of course he made many mistakes and often times was the benefactor of other people's work that he disagreed with.
Lest we forget if he had his way Ron Guidry would have been traded to the Blue Jays.
Bernie Williams would have been dealt countless times.
Jeter was almost dealt for Bryan Harvey!
As I wrote before the Yankees of the 1980s were a comedy of insanely bad decisions.
And Yankee managers Dick Howser, Billy Martin, Lou Piniella, Buck Showalter and Joe Torre all led other teams to the post season after getting fired by George.
But that was one of the things that made George fun as well... pointing out the mistakes and the BAD signings. The Hideki Irabus and Ed Whitsons... the Randy Johnsons and Carl Pavanos.
It's going to be different now. With the Yankees as a conglomerate and most owners being anonymous, you aren't going to see a lightning rod owner like this for a long time.
Who knows how interested Hank and Hal will be in running the Yankees?
Who knows what kind of passion there will be in the front office in the Bronx?
The Boss is gone.
Whether you loved him or hated him... feared him or mocked him... he made the game more fun.
I know I am going to miss him.
I covered a lot of this when I compared Steinbrenner to the Weinstein Brothers a few years ago... it is still applicable.
I don't know if there is an afterlife or not. There may be... there may not be... but if there is, I hope someone up there is recording the George Steinbrenner-Billy Martin reunion.
It would be a sight to behold.
Rest in peace, Mr. Steinbrenner.