Loves when the Red Sox win... even when I don't know who they are! 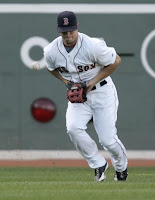 I looked at today's Red Sox box score and I saw Niuman Romero got into the game as a pinch runner.

Also I saw Robert Manuel got an inning of work in with some mop up duty.

I had never heard of either one before and I follow the Red Sox pretty damn closely.

If I told you that on the 3rd of July, the Red Sox DL would have more post season heroes than the line up and players like Daniel Nava, Darnell McDonald and Kevin Cash would be in the game, you'd assume the Sox season was lost.

Kevin Cash is back? I would rather have Elmo Creator Kevin Clash in the line up!

But your assumptions would be wrong.

After today's game, the Red Sox remain 1/2 a game behind the Yankees and tied for the most wins in baseball.

No need to go all Butch and Sundance on this team and ask "Who are those guys?"
I don't care, as long as they wear the Sox uniform.