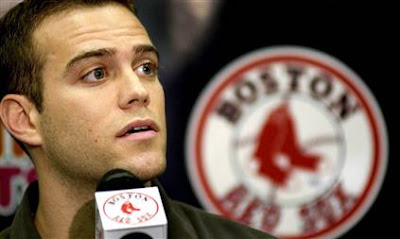 A year after they got swept from the Division Series and just a few years since a World Series title (with many World Champs still on the Roster), The Red Sox had an up and down season filled with some dramatic wins, frustrating losses, domination of the National League and man handling by the Yankees.

The main culprit were injuries that decimated the pitching staff and starting line up.
At the trade deadline, the Sox did nothing of note and held onto young players despite obvious needs.

Ultimately the Sox finished with a winning season but in third place.

In 2006 I was screaming for the Sox to make a deal. GET SOMEONE! Who cares about young players like Dustin Pedroia? Clay Buchholz? Jacoby Ellsbury? Need to win NOW!!!

They held on to players... let the Yankees and Blue Jays finish ahead of them... got healthy... made a few nice moves and it is safe to say 2007 worked out well for the Red Sox.

So with all the names bandied about, I was most excited to see Ryan Kalish in the bigs.

Another home grown player... and maybe one who could catch on.