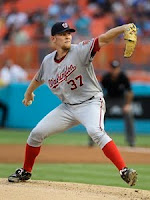 When I made my award picks at the 1/3 mark, I had Jason Heyward as the NL Rookie of the Year.

And when I my made 1/2 way mark picks just this week, I had Cardinals pitcher Jamie Garcia as the rookie of the year.

And if the season ended today, he should be...
But don't you get the feeling that Heyward and Garcia are going to be in third place at best when all is said and done?

I am guessing Stephen Strasburg and Buster Posey will be battling this one out.

Stephen Strasburg (whose presence in the All Star Game may have boosted its ratings above "Worst Ever" territory) just kept doing what he does best last night in Florida.

Meanwhile Buster Posey has been everything the Giants would have wanted and then some.
Since Bengie Molina was dealt away to the Rangers and Posey was given the full time catcher spot, his average has gone up from .289 to .352.

That's almost comical. Throw in the 6 homers in the 13 games since the Molina deal and maybe the Giants finally have a centerpiece for their line up.

But of course the main worry was can he call a game like Molina?
Well, the Giants have let up a grand total of 2 runs in their last 27 innings that Posey has called.

He knows what fingers to put down evidently.

What I am saying is if Jamie Garcia wants some hardware this off season, he had better pick up his game.