So is Roy Halladay just a freak of nature? 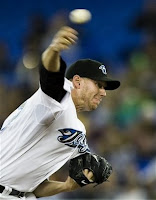 With Randy Johnson on the verge of 300 wins tonight, everyone seems to be lamenting the end of the 300 game winners.
As if the kind of ace pitcher who would win 15-20 year in and year out will go the way of the dodo.
Meanwhile last night in Toronto, a certain pitcher showed us all how it is done.
Halladay struck out 14 batters in a game the Blue Jays needed to win in order to keep pace with the Red Sox and Yankees.
But here's the other amazing part. When he got into trouble (and please sit down when you are reading this) he was allowed to pitch himself out of a jam.
He threw 133 pitches, and yet nobody is airlifting him to the Cleveland Clinic to see if his arm needs amputation.
Is he a freak of nature, this pitcher who throws complete games and consistently leads or is in the league lead of innings pitched?
I wonder how many pitchers who have been babied out of the minor leagues could have flourished the way Halladay did if they were allowed to pitch.
Is Halladay more talented than say Tim Hudson?
Maybe. Maybe not. But by age 25 Halladay was leading the league in innings pitched.
And now with a 9-1 record, his low ERA and leading the league in innings pitched, he seems well on track for his 5th top five finish for the Cy Young Award (including 4 straight top 5 finishes and winning the award in 2003.)
Why can Halladay do it and others can't? Or maybe they aren't allowed to.
Halladay has 140 career wins. He isn't even halfway to 300.
I predict he will win at least 10 more games this year and get to the halfway point at age 32.
Then he would have to average 15 wins a year between 2010 and 2019.
How's about this for a prediction?
Come back to Sully Baseball in 2019. We'll be celebrating Roy Halladay on the verge of 300 wins. And people will be saying about Halladay the same thing we are saying about Randy Johnson... will we ever see it again.
Sure we will.
If you let pitchers PITCH!
(By 2019 blogging will seem as quaint as CB radios now... I'll be 47 and my twin boys will be 14 years old and embarassed that their old man is still blogging!)