Are these two nice games... or is this love? 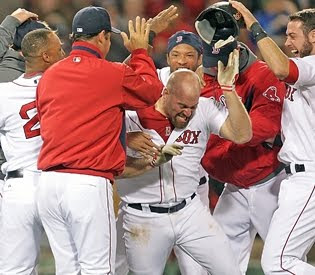 The Red Sox won two games as dramatically as you could in the last two nights... And today's win was as wild as you get.

Darnell McDonald hits another homer and Varitek makes a great block at the plate... 11 innings for the win.

Now is this the Red Sox playing out the averages? Or is it the moment when I realized this Sox team is better than I thought it was and that I am falling in love with them.

Swapping out Ortiz for Lowell seems to given the Sox a lift.
Somehow Varitek is hitting extra base hits.
And the bullpen was solid.

Then again I am not a fan of this Rangers team... and with a 5-9 record and a positive cocaine test looming over him, Manager Ron Washington should be nervous.

It could be love or just some lustful wins after a drought.

All I know is it is time to update the board.

DODGED A BULLET GAMES - 5
April 4 - 9-7 win against Yankees (On Opening Night, the Red Sox overcome a 5-1 Yankee lead with a game tying HR by Pedroia and a go ahead passed ball.)
April 10 - 8-3 win against Kansas City (Beckett out pitches Zack Greinke and nearly gets decapitated by a line drive.)
April 14 - 6-3 win in Minnesota. (Okajima gets Morneau to pop up with the bases loaded in the 7th and Papelbon wiggled out of a 9th inning jam.)
April 20 - 7-6 win against Texas. (Darnell McDonald introduces himself to Boston with an 8th inning game tying homer and a walk off hit in the 9th.)
April 21 - 8-7 win against Texas. (The Red Sox were down 4-0 early only to win it on Youk's 2 out 11th inning double.)
TEETH GRINDER GAMES - 5

The Sox are still below .500 and the Yankees and Rays look borderline invincible... but we aren't even in May yet. And at this point last year, the Yankees were a laughing stock.

I am just saying.

The Sox have only played 5 games that I wouldn't classify as either a dodged bullet or a teeth grinder. Something to think about.