When the Montreal Expos moved to Washington just before the 2005 season to become the Nationals, there wasn't a lot of time to come up with a look for the team's cap.

So basically they dusted off the Senators hats that have been sitting in a warehouse since they left town in 1971 and call them Nationals caps.

Heck the Mets took the old interlocking NY from the New York Giants, so there is a precedent for stealing from the past. 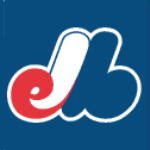 They of course could just flip the old Expos "M" upside down... but that would have been too radical.

Besides I guess they wanted to put the Montreal experience behind them.

But the why embrace a Senators past?

The Senators who, over two franchises between 1901 and 1971, won exactly 3 pennants... the Senators who between the 1933 AL Pennant and leaving for Texas after the 1971 season finished as high as second place two times, and both of those seasons were during World War II when the best players were fighting fascism.

They embraced the history of the Senators, a team so bad that a musical was made about them winning the pennant... and it involved a deal with the Devil!

But I already covered that in my post about Long Suffering Nationals fans.

Believe it or not, this is the beginning of the 6th season of Washington Nationals baseball.
That's more than enough time to develop a winner. The Diamondbacks won a World Series title in their 4th year (and nearly bankrupted the team.) The Marlins won in the 5th season, dismantled that team, and won it again in their 11th.

Now nobody is saying the Nationals should have a World Series contender by now... but an identity would be nice. That is, an identity other than "the worst team in baseball."

They have a young star in Ryan Zimmerman. The Nats have talented Ian Desmond at shortstop and some young arms like John Lannan, Jordan Zimmermann and Craig Stammen already on the big league squad and Drew Storen is on his way.

Plus the Nationals have the #1 pick over all this spring and can pick a potential star.
Am I missing anyone?

The Messiah of Washington baseball!

The only player on the Nationals that most baseball fans have heard of... and he has yet to throw an actual game for the Nats!

The last time I remembered such an anticipation for one player to change the culture of a team, it was LeBron James looking to become the savior of Cleveland.

And do you remember what they did before King James arrived? 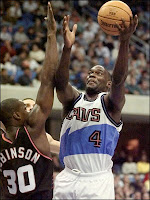 They changed their look!

Gone were the blue wave across the belly look.

Gone were the tops with CAVS across the top.

Those were the uniforms of a losing team.

New font on the uniform...

All fit for a king!

And none reminding the fans of the dreadful years that led to the lottery pick!


So before Strasburg becomes part of the big league team, let me suggest it might be time to ditch the cursive W.

Even Hall of Famers like Ted Williams and Frank Robinson couldn't manage a contender with that logo on their head!

I say go to the DC logo full time.

Yeah I know they use the DC hat as a practice hat and on some days as an alternate uniform.

Heck with that. Go full time! Ditch the cursive W all together.

The Strasburg era is coming up... and if he is as good as advertised, then maybe a young Washington pitching staff might blossom JUST as the Phillies run slows down.

Maybe there will be a contender in Washington without the aid of the devil.

And if that is the case, then I want them looking the part of a winner... and that cursive W just doesn't cut it.