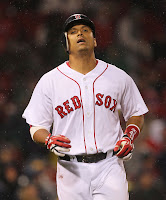 Well it is not every day that you can have TWO teeth grinders in less than 24 hours.

The Red Sox couldn't score a run with the bases loaded and 2 outs in the 11th inning, ergo losing a game on Saturday where the only offense was a Jason Varitek homer on Friday.

And oh yeah, fell a run short in the big comeback today.

The Red Sox are stumbling. And yes I know it is early and a modest 3 game winning streak will get them to .500.

As I said last winter, this is a team without an offensive identity. And it is starting to show big time.

At this point, forget the Big Papi/Mike Lowell platoon.

I'd be willing to go down to Pawtucket and see if Darnell McDonald is for real.
Why not? Anything to give this offense a jolt.

Either way, it's time to update the already cluttered tally.


DODGED A BULLET GAMES - 3
April 4 - 9-7 win against Yankees (On Opening Night, the Red Sox overcome a 5-1 Yankee lead with a game tying HR by Pedroia and a go ahead passed ball.)
April 10 - 8-3 win against Kansas City (Beckett out pitches Zack Greinke and nearly gets decapitated by a line drive.)
April 14 - 6-3 win in Minnesota. (Okajima gets Morneau to pop up with the bases loaded in the 7th and Papelbon wiggled out of a 9th inning jam.)
TEETH GRINDER GAMES - 5

Let's hope this is rock bottom