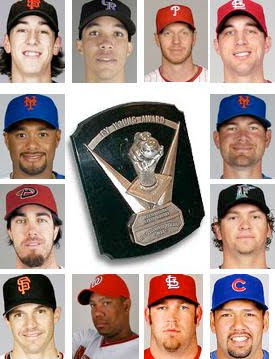 I know I have written about the NL Cy Young race a bit, but I truly find it to be fascinating. Yeah, it is early, but I don’t recall the last time I have seen this many legit candidates all get out of the gate so quickly. And as someone who loves dominating stud pitchers, this year in the NL seems to be a bumper crop!

Nobody in the AL is dominating like the top NL pitchers, and the usual suspects (Verlander, Sabathia, Lester, Beckett, Hernadnez, Greinke) aren’t putting up numbers the way that the NL’s top 12 are.

2006 wasn’t that long ago that the National League honored Brandon Webb with the Cy Young award for his solid but not exactly eye popping season.

This year? I doubt if Webb had the same season in 2010 that he would crack the top 5 when all is said and done.

I’ve counted 12 pitchers who are either former Cy Young winners off to solid starts, true aces who are dominating and a few guys whose careers looked over by the end of last year who are coming out blazing.

And this list of 12 doesn’t even include former Cy Young winner Chris Carpenter, nor dark horse candidate Ricky NolascoBoth have shown moments of brilliance, as has reliever Matt Capps. But this top 12 is a hard party to crack. 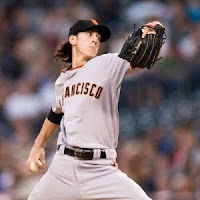 I truly believe if he can deliver a World Series title to San Francisco he will be the third biggest star in San Francisco sports history. He seems hellbent to make it 3 Cy Young Awards before his 27th birthday. He would have win #5 this afternoon if Brian Wilson could have held onto the 9th inning lead. Yet he still has a 1.27 ERA and leads the league in strikeouts. I guess that whole pot thing really slowed him down. 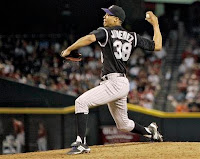 He is the first pitcher since Jack Morris in 1984 to start the season 5-0 with a no hitter. He is second in the league in innings pitched and has held opponents to a 0.79 ERA and a .186 average against. Oh yeah, he’s doing all of that in COLORADO!

Even with a loss the other day, Halladay is throwing like he wants Cy Young #2. Nobody has pitched more innings in the NL. He has 2 complete games and a shutout and his ERA is 1.80. And 5 of his 8 earned runs came in one start. I think it is safe to say it was a good pick up for Philadelphia.

He has the second lowest WHIP in the league and been an innings eater with a pair of complete games. He also has a tiny 1.69 ERA and a .187 batting average against to go with his 3 wins.

Santana had one truly lousy game against the Washington Nationals in early April where he let up 5 runs, 4 on a grand slam by Josh Willingham. He has let up a grand total of 3 other earned runs all season. He has a 3-1 record and even with the rocky start against Washington, has a more than respectable 2.08 ERA and has not let up more than 1 run in 4 of his 5 starts.

With all of these great performances out of the gate, do you know who LEADS the NL in ERA? That would by Pelfry, whose ERA is impressive (and snicker worthy) at 0.69. Throw in his 4-0 record and coming out of the bullpen to save the Mets 20 inning marathon and he deserves at least entry to the dance. 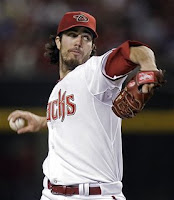 Who is second in the league for strikeouts behind Lincecum? Surprise! It’s Haren who has 38 in 34 innings of work. His ERA is a mediocre 4.50 but he’s been winning games (3-1 record), been eating up innings (third in IP behind Jimenez and Halladay) and has only 8 walks in 5 starts. 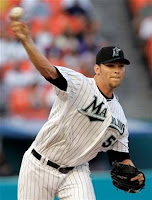 The Marlins well paid ace got out of the gate slowly but has been showing his ace stuff lately, especially after a complete game 3 hitter with 12 strikeouts and one walk against the Padres on April 26th. He is now third in the league in strikeouts. 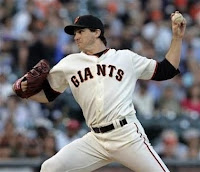 Remember when Barry Zito was on everyone’s short list for worst free agent contracts? Well now he is off to a 3-0 start and is averaging nearly 7 innings a start while posting a 1.32 ERA. Oh, by the way… his .161 batting average against is the lowest in the National League! Not bad for a crummy contract. 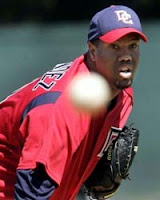 Yes. It’s the same Livan Hernandez. An after thought starting pitcher on a potentially god awful Nationals team, the beneficiary of the Late Eric Gregg’s strike zone has won 3 of his first 4 decisions including a complete game shutout. His 0.87 ERA and .176 Batting Average Against are both third best in the league and his WHIP is 4th best. Will he keep that up? Who am I to say?

The same Brad Penny who was run out of Boston on a rail is 3-0 in St. Louis this year. His 0.94 ERA is 4th best in the league. He has gone at least 7 innings in all 4 of his starts and has yet to let up more than 2 runs in any of them.

Another headcase solved by Dave Duncan!

One team’s garbage is another team’s treasure. Dumped into Chicago from Seattle in exchange for lunatic Milton Bradley, the Cubs may have stolen a winner…or least rejuvenated a talented pitcher with a fresh start. In 4 starts and 26 innings, Silva has the lowest WHIP in the league, plus a tiny 1.73 ERA and the fourth lowest Batting Average Against in the NL. Throw in a 2-0 record and a 5-1 strikeout to walk ratio and the Cubs may have more than coffee grounds from Seattle. Meanwhile Bradley is flopping as a .204 hitter flipping off fans with the Mariners.


So it will be interesting to see how many of these dozen remain Cy Young contenders month to month... I am guessing pitchers like Santana and Johnson will see their numbers improve and the Pennys and the Silvas would come back to Earth.

But who knows? I guess YOU picked Zack Greinke to win the Cy Young last year!