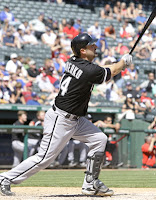 I didn’t know that.

Granted he just reached double digits a few hours ago. But still, I didn’t know he was so close to 10 that a pair of homers this afternoon in Arlington would do the trick.

Maybe I didn’t know because the White Sox haven’t exactly been hitting the cover off the ball… they have the lowest team batting average in all of baseball and have the second lowest team on base percentage in the American League.

But here we are… the first home run hitter to double digits is Paul Konerko.

When you think of it, Konerko has had a pretty cool career. Not a Hall of Fame one, but certainly one that would earn him a spot on the U.S. Cellular Field outfield wall of retired numbers.

He may have been kicked around early in his career (he played for 3 big league teams in his first 4 seasons) but he has been an underrated fixture in Chicago. In a free agent era when people skip town constantly, he has spent 12 straight years in the South Side of Chicago. He was supposedly off to the Angels after the 2005 World Series… but decided to stick around with the Sox.

Plus he has been a horse in the post season. He played for the 2000 and 2008 Division Champions… and of course was a big part of the 2005 World Champs run.

He crushed a key homer off of Tim Wakefield in Game 3 of the Division Series.
He hit first inning homers in Games 3 and 4 of the ALCS on his way to the Series MVP award.
And his grand slam off of Chad Qualls in Game 2 of the World Series turned a 4-2 deficit into a 6-4 lead.

Now here he is, leading the league in homers so far.
He’s had a cool and underrated career.

Like everyone on that White Sox team (including his currently unemployed former teammate Jermaine Dye) , there were no superstars (especially with Frank Thomas hurt). Just a bunch of guys who did their jobs well.

So I didn’t know Konerko had 10 homers already… and if nobody else in cyber space is going to salute him, I WILL!