Jason Heyward homered in his first big league at bat and so far the most hyped young player NOT named Stephen Strasburg looks like he is as good as advertised.

I heard one announcer call him J-Hey. And evidently that is his nickname.

I guess that is part of the new baseball nickname trend... take the first letter of the first name and the first syllable of the last name and BOOM! Nickname.

I guess it worked for A-Rod.

Not sure what I think about it... but evidently it is catching on. 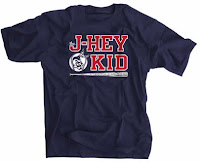 But I was thinking... you know how some songs become big big hits at stadiums?

I am sure that means a lot of extra dough for the people who made the song.

I hope Sister Sledge got some dough from the Pirates in 1979! 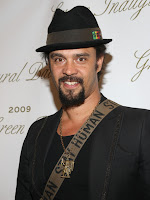 When I heard J-Hey being said a few times, I was remind of Michael Franti and Spearfish's song Say Hey.

Now I know Michael Franti is all barefoot and loves doing all of his third world stuff... but think of it.

Say Hey is a fun catchy song... it's the kind of song that could get a crowd dancing (a hell of lot more than Sweet Caroline!)

So let's have him do a variation of Say Hey called J-Hey.

Then have that song played at Turner Field... and if this Jason Heyward is what we think he is, he'll be playing that song for the next 15 to 20 years.

Cha-CHING! He will have enough dough to travel to every third world country and look cool with no shoes for a long long time.

Think about it Michael... you are thin and good looking now, but so was Neil Diamond.

Think about it... take the money now.

Nobody is asking you to do the Tomahawk Chop.
Just write some new lyrics for a song about love and make it about a right fielder!