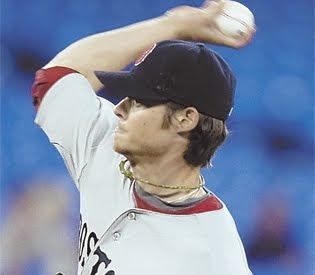 The Red Sox dodged another bullet yesterday, and along the way rested their pen and won another series.

But I noticed something as I updated the tally... the Red Sox have dodged 9 bullets this year. Meaning that 9 times this year they won games that they very easily could have lost.

They have a grand total of 10 wins so far.

The only win so far this year that I didn't put down in the Dodged Bullet category was an 8-6 win against the Royals. The Sox took a 5-1 lead early in the game and while the Royals cut it close, I never thought they were going to win.

That being said, the Royals had the tying run on deck in the 8th and 9th... which means that they COULD have lost the game without a huge stretch of the imagination.

And the other 9 wins included come from behind wins, slug fests, pitching duels and extra inning thrillers.

That means with a bounce here, a home run there and a called third strike sprinkled into each of the Red Sox 10 victories and they could be winless.

And instead of knocking on .500's door (which they could do with a win tonight) they'd be matching the 1988 Orioles' start!

DODGED A BULLET GAMES - 9
April 4 - 9-7 win against Yankees (On Opening Night, the Red Sox overcome a 5-1 Yankee lead with a game tying HR by Pedroia and a go ahead passed ball.)
April 10 - 8-3 win against Kansas City (Beckett out pitches Zack Greinke and nearly gets decapitated by a line drive.)
April 14 - 6-3 win in Minnesota. (Okajima gets Morneau to pop up with the bases loaded in the 7th and Papelbon wiggled out of a 9th inning jam.)
April 20 - 7-6 win against Texas. (Darnell McDonald introduces himself to Boston with an 8th inning game tying homer and a walk off hit in the 9th.)
April 21 - 8-7 win against Texas. (The Red Sox were down 4-0 early only to win it on Youk's 2 out 11th inning double.)
April 23 - 4-3 win against Baltimore. (The Sox blow a 3-0 lead but win it on Adrian Beltre's bases loaded walk.)
April 24 - 7-6 win against Baltimore. (The Red Sox score 6 in the 7th and hold off a late Baltimore comeback attempt.)
April 26 - 13-12 win at Toronto. (The Sox blow an early 5-0 lead but hang on for dear life in a slugfest.)
April 27 - 2-1 win at Toronto. (Buchholz holds the Jays down for 8 but it takes a bases loaded walk in the 8th to go ahead.)
TEETH GRINDER GAMES - 6