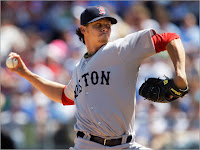 Clay Buchholz was #61 when he threw a no hitter.
Now he is wearing number #11.

Call me crazy, but if I threw a no hitter in the big leagues, I wouldn’t change my number for ANYTHING.

Finally the Red Sox played a game that was neither a dodged bullet game nor a teeth grinder game.

Yes, I know the final score was closer than yesterday’s Dodged Bullet. But the minute the Red Sox took a 4-0 lead in the first, I didn’t really think the Royals were going to win.

Even when Guillen homered again, I wasn’t really worried.