The Pirates Alternate Unis Are Awesome

I've written a few snarky posts about uniforms this year... from the Indians indecision about a hat and the Royals and Rays not getting how to do powder blue uniforms properly.

And I've written a few things about the Pirates... one encouraging... and a few more where I insist that they give out free tickets for the season (I made this assertion twice.)
But with all of this sarcasm and complaining, I think it is time for a positive post.
So I'll say it: The Pirates alternative uniforms are the best alternative uniforms in baseball.
The black top with the yellow P looks terrific. And it doesn't harken back to any specific era... it is just a well thought out piece of merchandising. 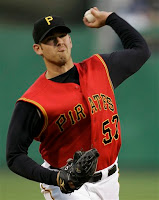 It is a hell of a lot better than their ill conceived red tops that they vomited up in the mid 2000s.
Does anyone remember these?
Does anyone own any one of these?
Is this a left handed pitcher or a freshman quarterback? 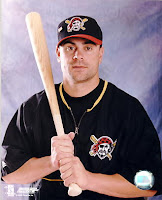 And I certainly like it better than any of their uniform options with the lame Pirate logo on it.
That Pirate logo has always stunk... as has most of the teams playing with that logo.
Besides, anyone knows that the best Pirates logo was THIS ONE: 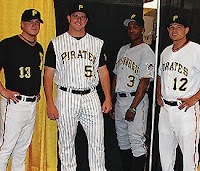 The 2010 Pirates have no shortage of uniform options... and they are all good solid traditional uniforms. The black and gold with the old fashioned lettering is all nice.

The white top/white bottom look is a little conservative but fits the Pirates tradition.

I am not crazy about the pinstripe variation, but the sleeveless is good.
It harkens back to the Bill Mazeroski era.
But the black uniform is cool... in fact I would argue that it is a better top than the road unis with PITTSBURGH written across.
I think the black tops should be the regular road jerseys.
I don't that is a radical idea... and the Pirates have had some radical uniforms in the past, including when they last won the World Series in 1979.

How many uniform variations did they have?
Striped tops, striped bottoms...
Black tops... black bottoms...
Yellow tops... yellow bottoms...
Yellow Caps... Black Caps.
It seems like they used a spinner to see what random combination they'd have.
Even the great "Dressed to the Nines" data base missed one combination

The black top, yellow bottom, yellow hat combination wasn't covered in their drawing.
They certainly stood out (and resembled bees in the process.)
I say don't save the new black tops for special occaisions.
Bust it out on the road and look cool in the process.
You may not have a winning product on the field, but that doesn't mean you need to LOOK like a loser. 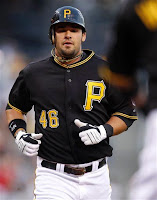