That was more stressful than a win against Baltimore should be! 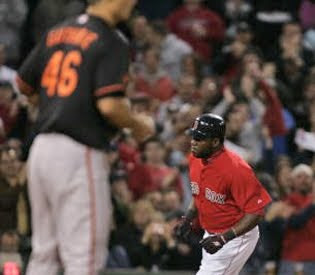 Seriously... the Orioles have only two more wins than the Seattle Pilots this year. And the Pilots haven't existed since 1969.

Games against the Orioles should be tied in the 8th... but they should end as a W, which in the end is all that matters.

April 4 - 9-7 win against Yankees (On Opening Night, the Red Sox overcome a 5-1 Yankee lead with a game tying HR by Pedroia and a go ahead passed ball.)
April 10 - 8-3 win against Kansas City (Beckett out pitches Zack Greinke and nearly gets decapitated by a line drive.)
April 14 - 6-3 win in Minnesota. (Okajima gets Morneau to pop up with the bases loaded in the 7th and Papelbon wiggled out of a 9th inning jam.)
April 20 - 7-6 win against Texas. (Darnell McDonald introduces himself to Boston with an 8th inning game tying homer and a walk off hit in the 9th.)
April 21 - 8-7 win against Texas. (The Red Sox were down 4-0 early only to win it on Youk's 2 out 11th inning double.)
April 23 - 4-3 win against Baltimore. (The Sox blow a 3-0 lead but win it on Adrian Beltre's bases loaded walk.)

Is it too much to ask for a stress free ballgame tomorrow?