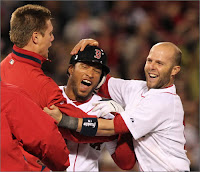 The other day I wrote about the Red Sox hitting rock bottom and I suggested they bring up Darnell McDonald.

You can look it up.

Now I am not saying I knew he'd be an instant folk hero in Boston... stroking a game tying homer in his first at bat and winning it in the 9th.

But I saw his stats in Pawtucket and thought "Hey, maybe he can be a spark."

Maybe a guy getting another shot at the bigs... an unknown with no expectations... a scrappy player who needs to play hard for his salary... maybe that's what the Red Sox needed.

A single spark can start a fire.

And Darnell McDonald was holding a sparkler tonight!

And held a "dodging bullets clinic."

DODGED A BULLET GAMES - 4
April 4 - 9-7 win against Yankees (On Opening Night, the Red Sox overcome a 5-1 Yankee lead with a game tying HR by Pedroia and a go ahead passed ball.)
April 10 - 8-3 win against Kansas City (Beckett out pitches Zack Greinke and nearly gets decapitated by a line drive.)
April 14 - 6-3 win in Minnesota. (Okajima gets Morneau to pop up with the bases loaded in the 7th and Papelbon wiggled out of a 9th inning jam.)
April 20 - 7-6 win against Texas. (Darnell McDonald introduces himself to Boston with an 8th inning game tying homer and a walk off hit in the 9th.)
TEETH GRINDER GAMES - 5

Are we living in the Darnell McDonald era?
Remember, virtually nobody noticed when the Red Sox picked up Dave Roberts in 2004.
I'm just saying