Hey Theo... put the phone down 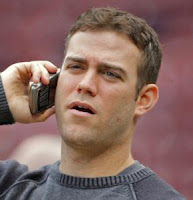 Mike Lowell made your job a little easier.

He's probably going to hang up his spikes after this season... so to try and trade him will be kind of a hard sell.

"Hey, how would you like a part time right handed hitter who doesn't have his old mobility?"

"Well you have to act now because he is going to retire in 5 months."

You'd get more for the sequel rights of Pluto Nash.

It was a nice idea over the off season to try and get a prospect for Mike, but alas his health conspired against that idea.

So instead of trying to get a backup outfielder who will probably rot on the bench for the Lowell Spinners or pick up cash considerations that couldn't pay for the coffee creamer in the clubhouse, why not just keep Mike Lowell around?

Everybody loves the guy. He's a World Series MVP. And if he is going to retire, why not have him retire as a Red Sox for real instead of signing a one day contract like Nomar!

There's a novel thought! Have someone AVOID the Ungrateful Exit from the Red Sox roster!